He came from Bhera, now in Punjab, Pakistan, and was the brother of Bhisham Sahni, noted Hindi writer, playwright, and actor. 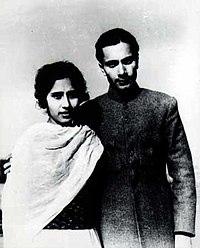 Balraj Sahni with his wife Damayanti, 1936.

Sahni went from his native Rawalpindi, Pakistan to study at Lahore University, Pakistan. He completed his master’s degree in English Literature from Lahore and then went back to Rawalpindi and joined his family business. He also held a Bachelor’s degree in Hindi, followed by a Masters in English from Punjab University. Soon after, he married Damayanti Sahni.

In the late 1930s, Sahni and his wife left Rawalpindi to join Tagore’s Visva-Bharati University in Shantiniketan in Bengal as an English and Hindi teacher. It is here that their son, Parikshit Sahni was born, when his wife Damayanti was doing her bachelor’s degree. He also went to work with Mahatma Gandhi for a year in 1938. The next year, Sahni, with Gandhi’s blessings, went to England to join the BBC-London’s Hindi service as a radio announcer. He returned to India in 1943.

Sahni was always interested in acting, and started his acting career with the plays of the Indian People’s Theatre Association (IPTA). He started his film career in Mumbai with the film Insaaf (1946), followed by Dharti Ke Lal directed by KA Abbas in 1946, Door Chalein in 1946, and other films. But it was in 1953, with Bimal Roy’s classic Do Bigha Zameen, that his true forte as an actor was first recognised. The film won the international prize at the Cannes Film Festival.

He followed it up with an encore in the 1961 classic Kabuliwala penned by Tagore.

Sahni’s wife Damayanti, who was the heroine of his film Gudia, died at a young age in 1947. Two years later, he married his first cousin, Santosh Chandhok, later known as an author and television writer.

Sahni’s acting was very well liked and appreciated in all his films. He acted opposite top heroines like Padmini, Nutan, Meena Kumari,Vyjayantimala, and Nargis in films like Bindya Seema (1955), Sone Ki Chidiya (1958), Sutta Bazaar (1959), Bhabhi Ki Chudiyaan (1961),Kathputli (1957), Lajwanti (1958) & Ghar Sansaar (1958).his character roles in films like “Neelkamal”,”ghar ghar ki kahani” “Do raste”and “ek phool do mali” were greatly appreciated. However, he is perhaps best remembered by the current generation for the picturisation of the legendary song Ae Meri Zohra Jabeen from the movie Waqt (1965) on him. Sahni appeared opposite Achala Sachdev in the number.

His role as the angst ridden but stoical Muslim man who refuses to go to Pakistan during partition, in his last film Garm Hava, has often been called his best performance by critics. Balraj, however, could not see the completed film to rate his own performance, as he died just the day after he finished dubbing work. The last line he recorded for the film, and hence his last recorded line is, Hindustani:- “Insaan Kab Tak Akela Jee Sakta Hai?” which can be translated in English as:- “How long can a man live alone?”

Sahni was a gifted writer; his early writings were in English, though later in life he switched to Punjabi, and became a writer of repute in Punjabi literature. In 1960, after a visit toPakistan, he wrote Mera Pakistani Safar. His book Mera Rusi Safarnama, which he had written after a tour of the erstwhile Soviet Union in 1969, earned him the ‘Soviet Land Nehru Award’. He contributed many poems and short stories in magazines and also penned his autobiography, Meri Filmi Aatmakatha. Sahni was an extremely well-read and politically conscious person.

He and P K Vasudevan Nair worked on the idea of All India Youth Federation with firebrand Delhi communist, Comrade Guru Radha Kishan to organise the first national conference of AIYF in Delhi. Their wholehearted efforts were visible as more than 250 delegates and observers representing several youth organisations of various states of India attended this session. Balraj Sahni was elected as the first president of All India Youth Federation, the youth wing of Communist Party of India. The organisation was a huge success and strong presence of the organisation was noticed by other political groups and the senior communist leaders everywhere.

Sahni also dabbled in screenwriting; he wrote the 1951 movie Baazi which starred Dev Anand and was directed by Guru Dutt. He was also a recipient of the Padma Shri Award (1969). Balraj Sahni also wrote in Punjabi and contributed to the Punjabi magazine Preetlari. Very few people know about his love for the books, In 1950s he was first to inaugurate the Library and study centre for underprivileged class in Delhi.

Sahni was undoubtedly one of the greatest actors ever to come on the Indian screen: a highly natural actor who reminded the audience of the actors like Motilal because of his simple persona and a sophisticated style of acting. He was looked up to as a role model as he was never involved in any scandal. His acting in Do Bigha Zameen and Garam Hawa were the highlights of his career. He believed in what is known as Neo-Realistic cinema.

Balraj’s brother Bhisham Sahni was a well-known writer who wrote the book Tamas. His son Parikshit Sahni is also an actor. Balraj Sahni died on 13 April 1973, of a massive cardiac arrest, less than a month before his 60th birthday. He had been depressed for some time by the untimely death of his young daughter, Shabnam.

‘Punjabi Kala Kender’, founded in 1973 at Mumbai by Balraj Sahni, gives away the annual Balraj Sahni Award’,and also the ‘All India Artists’ Association’

A postage stamp, bearing his face, was released by India Post to honour him on 3 May 2013.

Published on May 14, 2017 The Real Mother – Punjabi Short Movie – Based on a True Story – Addi Tappa Music This movie is based on a…